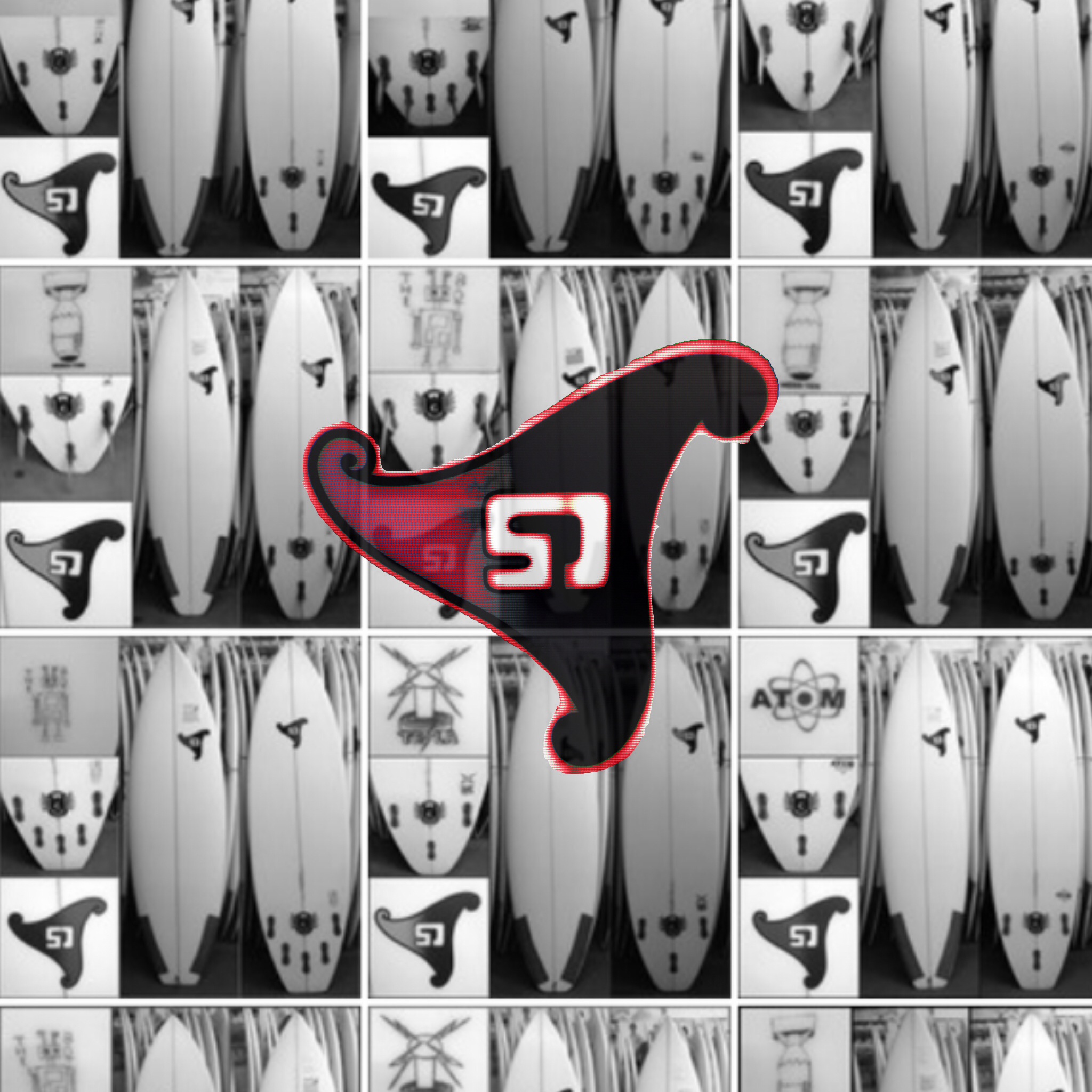 All summer jet surfboards are designed on computers and cut on a CNC (computer controlled) shaping machine. Then they are all finished by the same shaper, Bill Gieger, an expert in the field, with over thirty years of shaping experience.  This way we have compete control over every detail of the design of each board.  We use the best materials made,  including;  US Blanks, Aerialite fiberglass,  Silmar resin, and FCS II  fin boxes. Standard on every board are carbon fiber reinforced rails on the tails, a 4oz  patch on the bottom around the fin boxes,  and a glossed and wet sanded finish,  all intended to make the most durable boards possible.  The standard bottom on our boards, unless otherwise noted, is a single concave in the middle of the board, going into a single concave with a double inside it between the front fins and ending with a slight double concave “V” at  the tail.  This bottom gives the best combination of lift, or speed, and control.  Each design has different amounts of concave and “V” but the basics are the same. You can change anything you want. Custom orders are welcome! 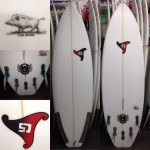 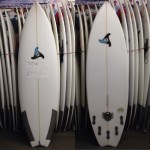 With the boar, weak, blown out surf becomes fun. It has low rocker, single to double concave with V out the back and a wide tail. It paddles great, gets into waves early, and crosses flat spots like it has a motor. This board is higher volume than a standard board and paddles better. Can be ridden any dimensions but the standard is 2 inches shorter, 1/2 inch wider, and the same volume as your standard board. Works great as a quad. 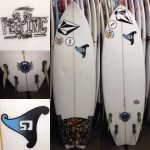 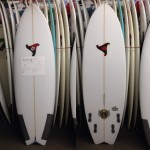 The Peeping Tom  is a great board to have if you want to have fun surfing in mediocre conditions! With this board even the most weak and poor quality waves become fun.  It paddles and glides like a fish, but it can still jam in the pocket like a shortboard.  A great Summer time board, and a great addition to any quiver. The quad set up gives the board a great loose feel that is essential for making the most of small waves, while still maintaining drive when the board is on rail.  If you want a board that can ride waves that you would normally need a longboard for, and you’re a fan of the glide of a fish, but don’t want the clunkiness, then this board is a must have!  Comes standard as a quad. Large fins recommended for this board. 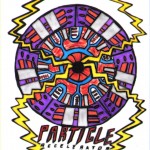 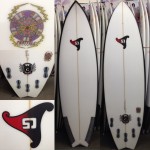 The Particle Accelerator is an ultra fast small wave board  with a wider nose, low entry and exit rocker, a double concave out the tail,and a wing swallow tail. The wing on the tail allows for the tail to become narrower without having to add curve. This maintains that straight line that you want in the tail for the added projection, while pulling in the tail for added pivot in the pocket.  All these things come together to make a super fast high performance small wave board! 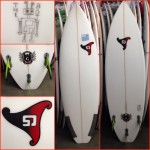 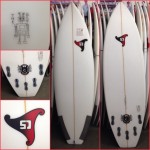 The bot is flatter and wider than a standard short board. The bottom has a single concave center to a double between the fins to V out the tail. Combine all that with a medium thickness rail and you have a board that is stable yet easy to turn. It excels in less than perfect surf and can be ridden by any skill level. Bigger sizes make a great junk wave board for the average surfer while smaller boards can be ridden by experts in a wide range of surf. 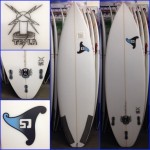 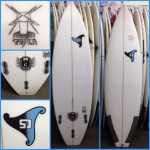 A full outline, low rocker, lots of concave, and the boxiest rails make the Tesla the liveliest board in the Summer Jet arsenal. It paddles  better than most shortboards with similar volume, and is for intermediate to expert surfers in surf up to head high. This is an ultra high performance high volume board.  It has all the characteristics of a very responsive high performance board combined with boxier rails and extra volume to help the board fly through flat sections and surf weak waves as if they have much more power than they actually do. 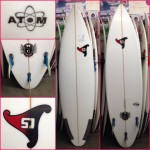 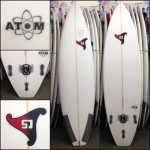 The Atom is the “standard” shortboard. The single concave to V bottom, the rocker, the rail thickness, and the tail width are all in the middle compared to other boards. This happy medium creates a board that is very versatile and user friendly, which means that this board works in a wider range of surf and for more people than any other design in the summer jet arsenal. Can be ridden from your height to a foot longer. Works good as a thruster or a quad in surf ranging from shoulder high to double over head. 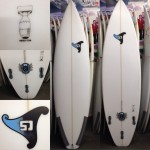 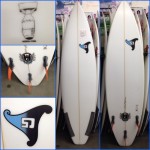 The Mega-Ton is a step up for the Tesla . It has thinner rails and less concave to better handle more powerful surf, but it still has the low rocker to carry speed around sections and over flat spots. The board features a low entry rocker which gives the board a ton of speed off the front foot, with a bit of extra tail rocker to give the board more control and release in the pocket.  This is a great all-around board.
THE PHOTON 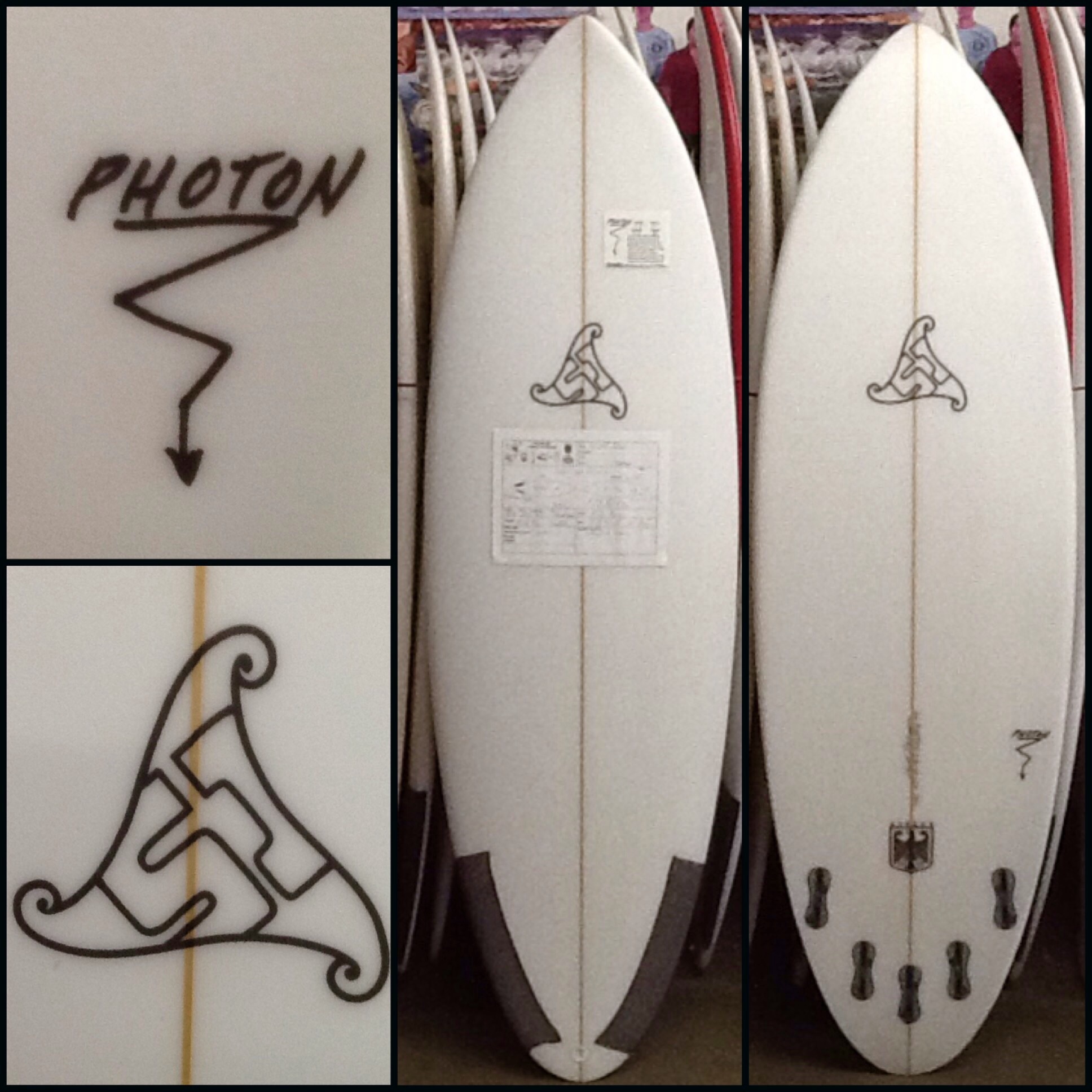 If you want better paddling but still want a board that can turn like a shortboard, the Photon can do it. The front half is wider and thicker while the tail is pulled in like a regular board. It’s made to be the same length but wider and thicker than your shortboard. This is a great board for someone who wants to have that extra floatation and paddling power, but still be in control. The wide nose gives the board that extra paddling power and down the line speed, while the thin rails and narrow tail offer the turning precision needed to be able to control that speed.
THE CHARGED PARTICLE 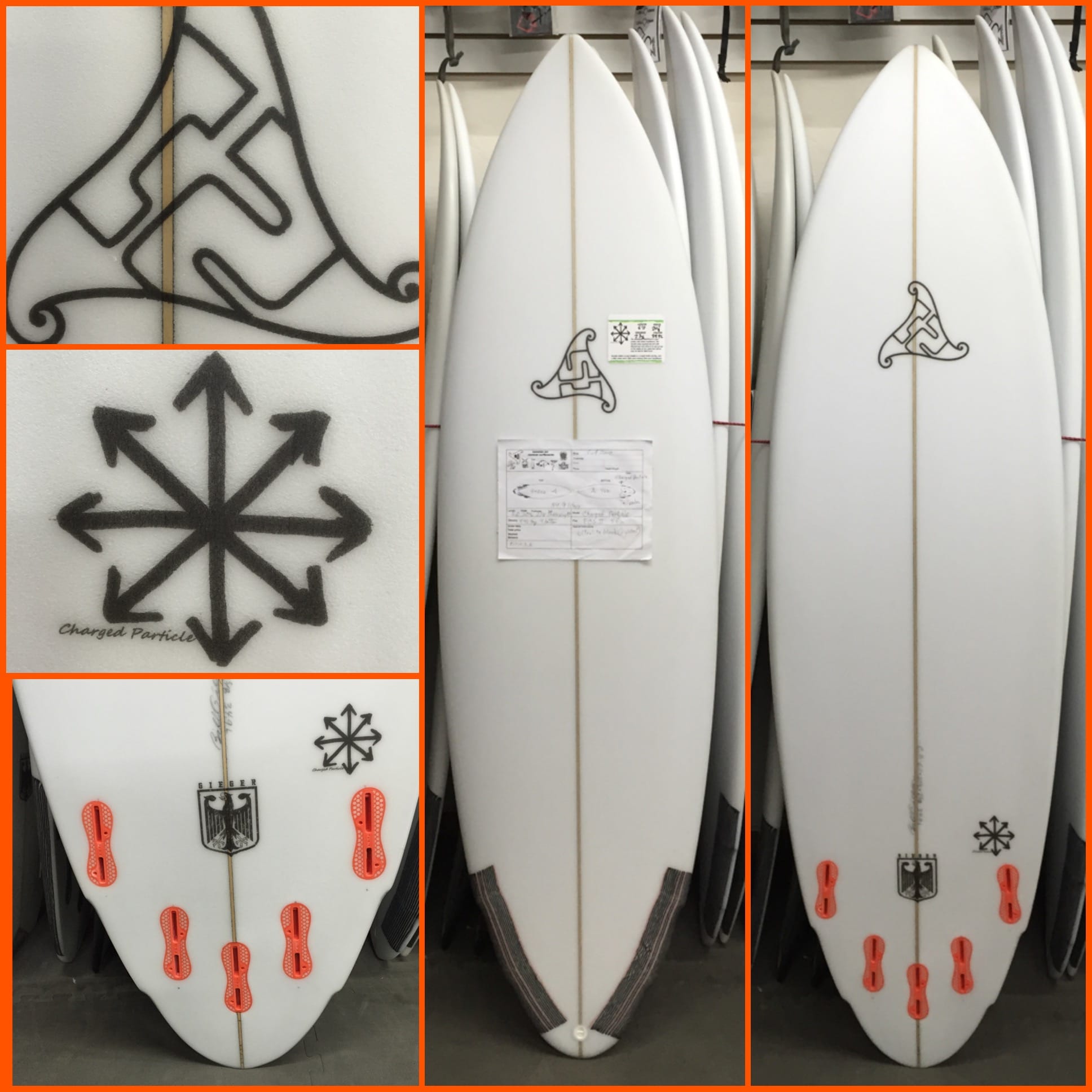 The Charged Particle is a low rocker full volume shortboard with a really rad double wing rounded pin tail! The full volume, low rocker, and wide point up front make for a great paddling and fast board, while the thin rails and narrow double wing round pin, make the board responsive and easy to turn. This is a great board for anyone who needs extra volume, especially a surfer who wants excess volume, but still wants a responsive board under their feet.
THE GIEGER COUNTER
If you’re looking for a reliable high performance short board that can be used in a variety of conditions, then the GIEGER Counter is the answer. This board has the narrowest outline and most rocker of any board in the Summer Jet arsenal, making for a very responsive board that can turn tight in the pocket as well as draw out full rail carves in critical sections. This board can be used as an every day shortboard, and it can also be ordered longer with a pintail to function as a step up. Works great as a thruster as well as a quad.

This is a segment from 2013 of Aron Gieger surfing on the Gieger counter, and an early version of the Tesla: 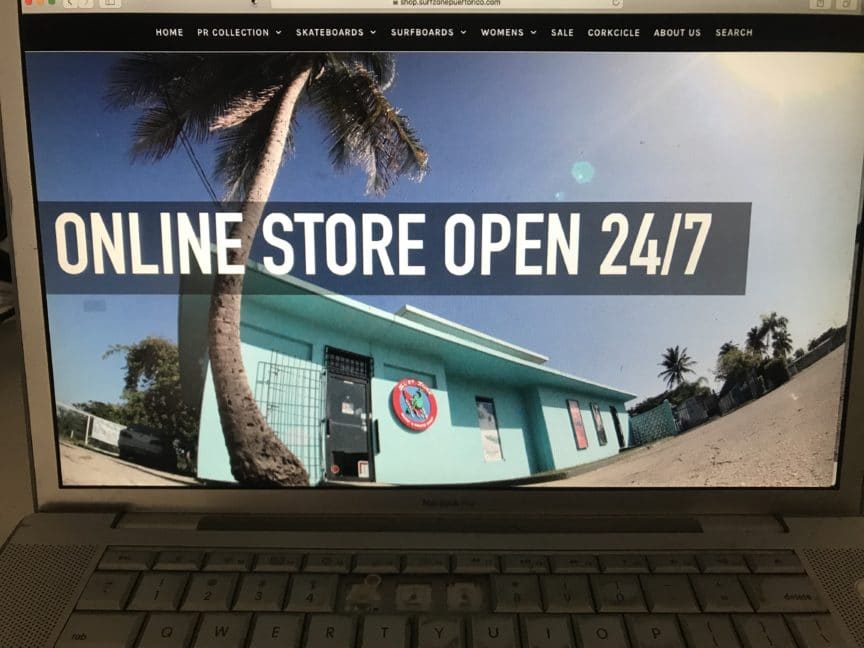 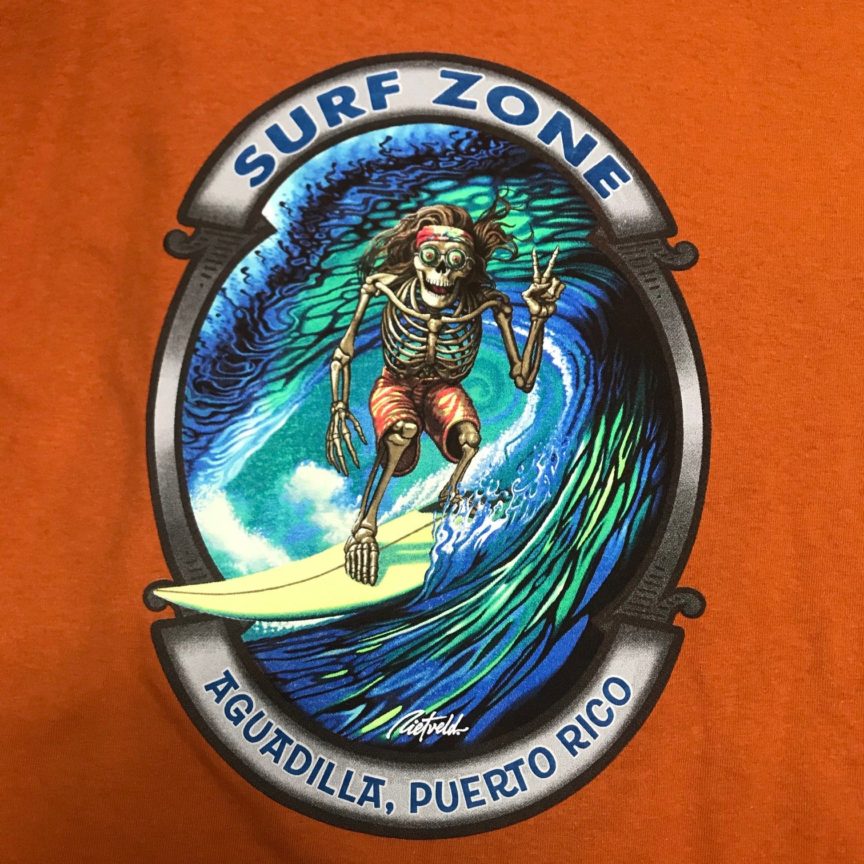 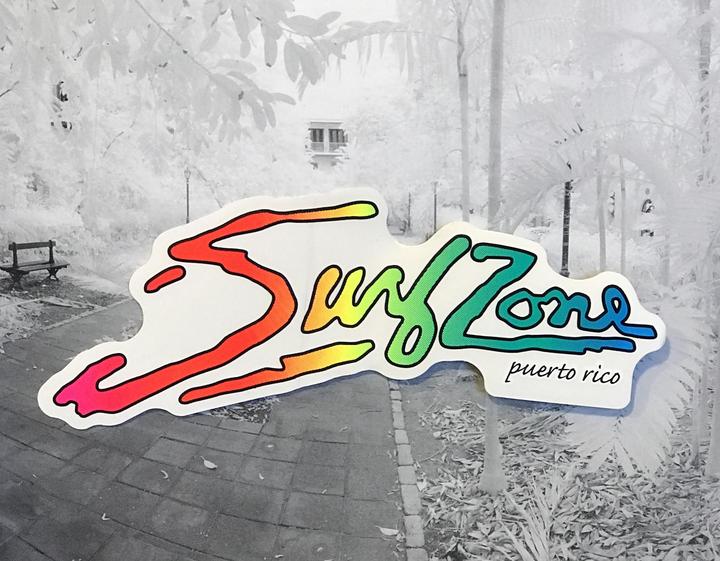 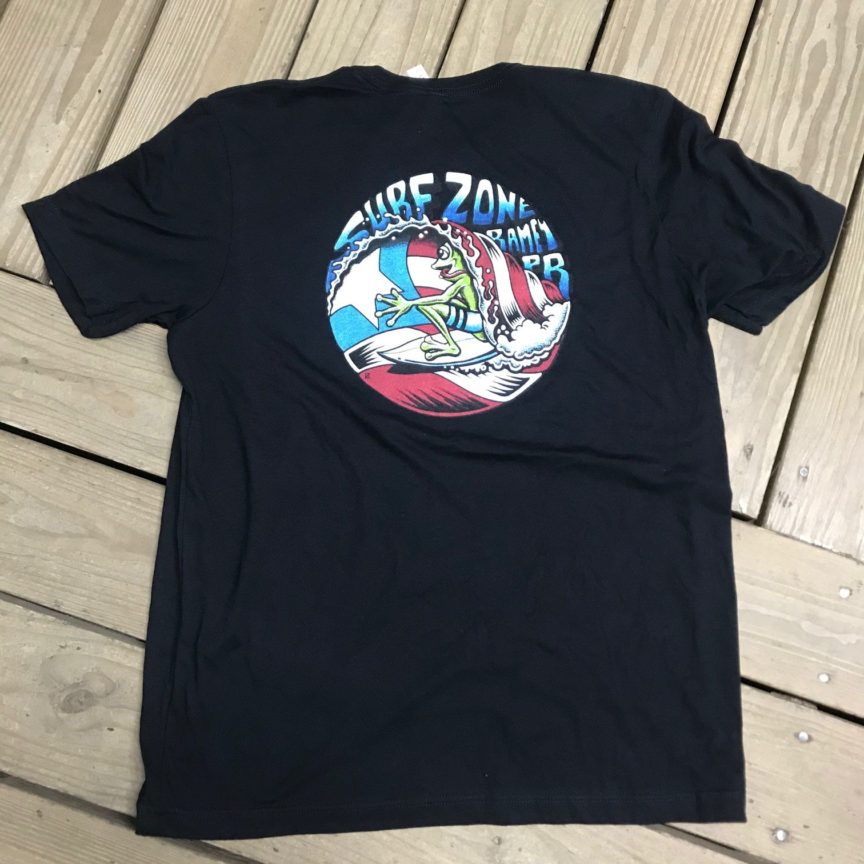 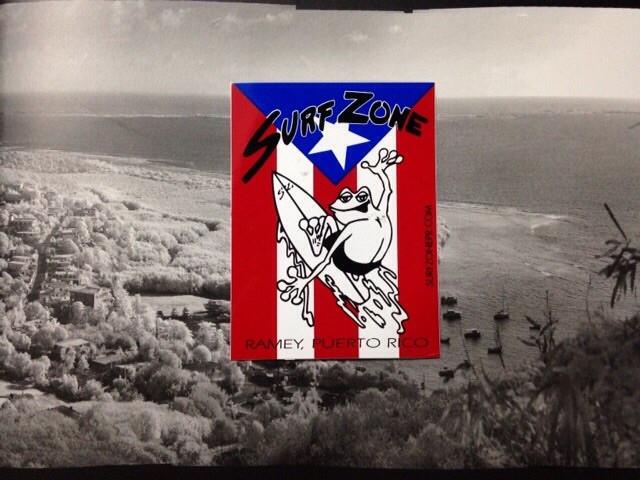 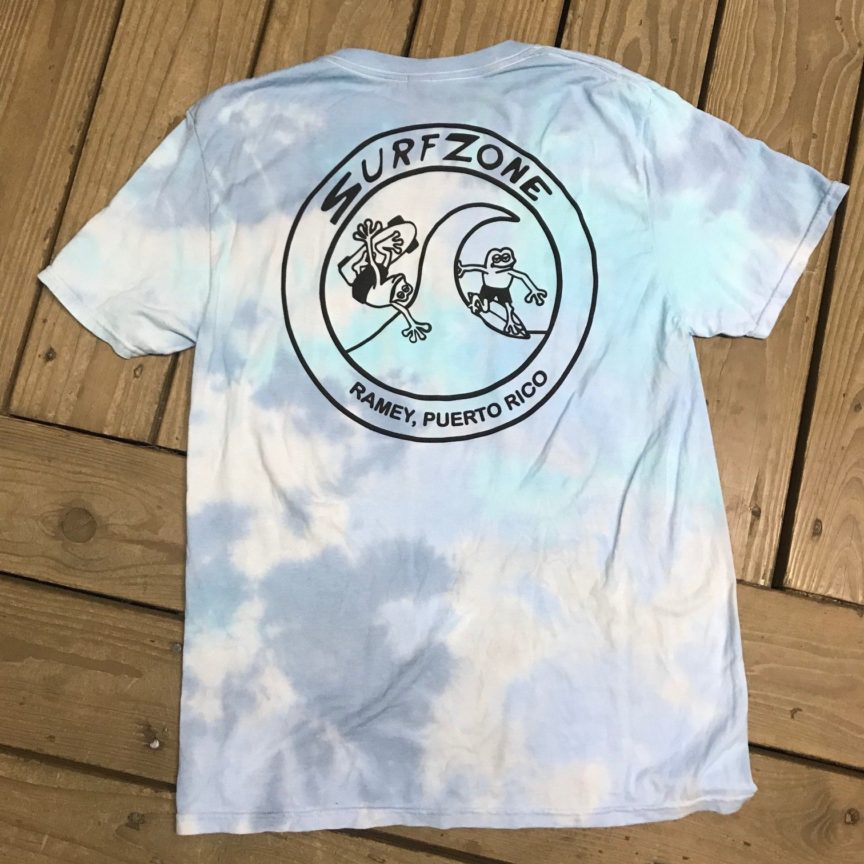 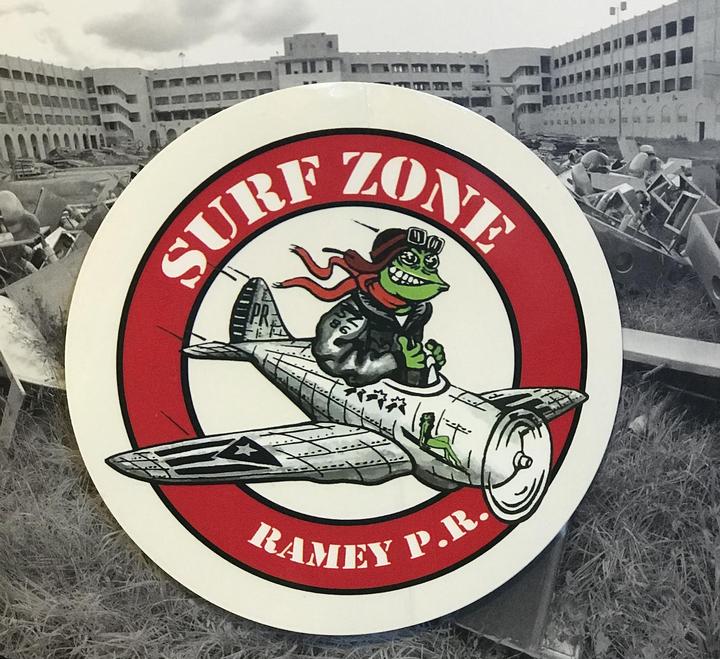 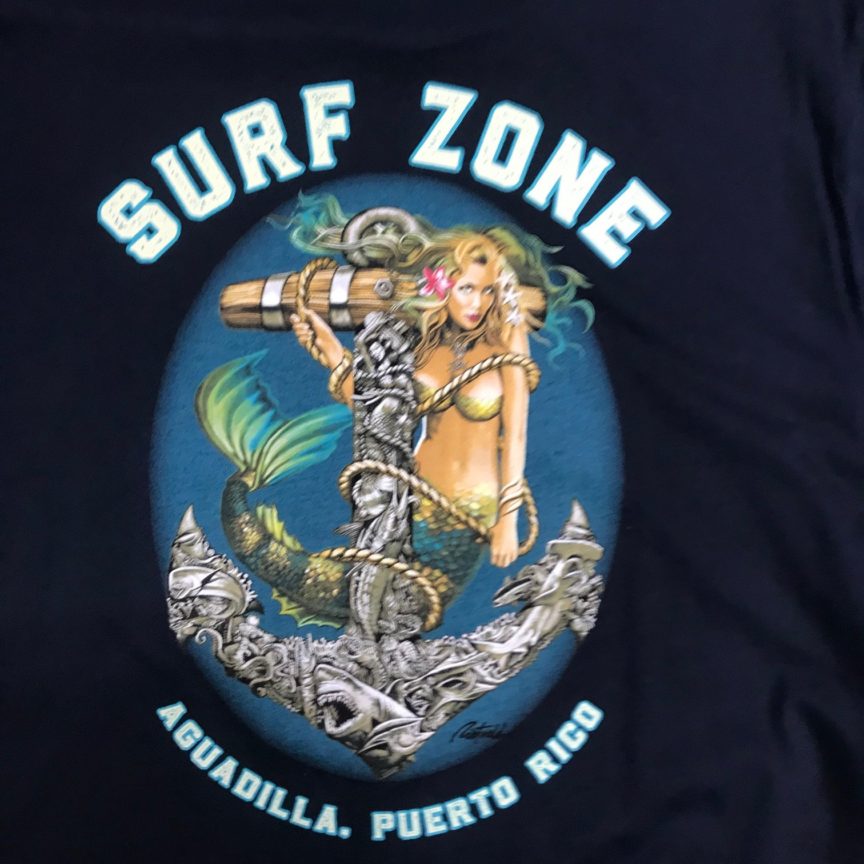 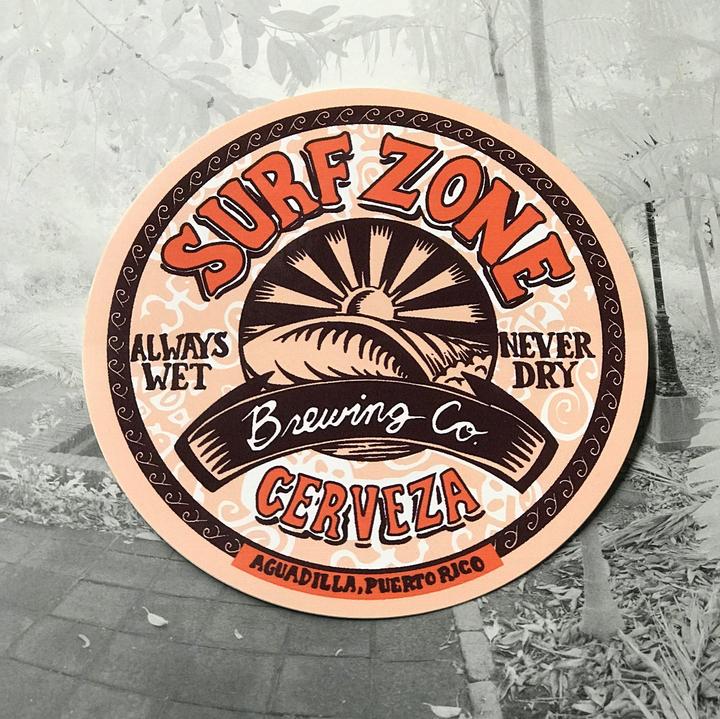